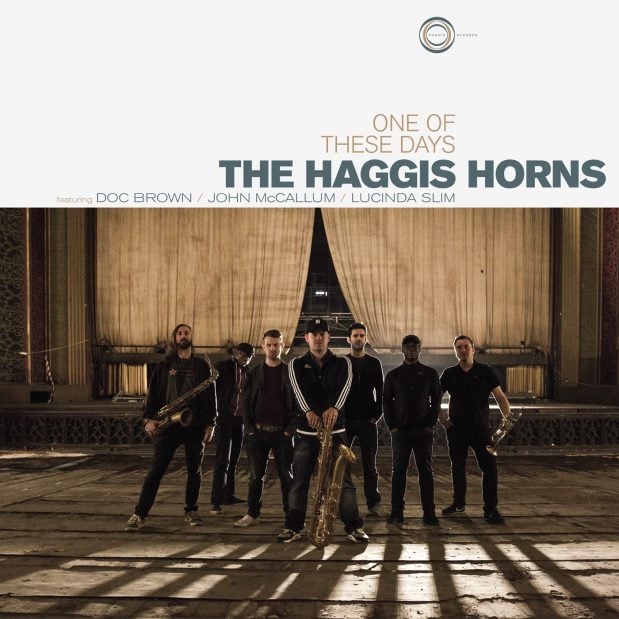 One Of These Days

Essential Tracks: Curse Of The Haggis, New York Beat, All Fuzzed Up

Deep funk purveyors The Haggis Horns are back with their fourth offering One Of These Days. In true Haggis style the menu serves up nine appetising tunes that include a main course of funk, a sprinkling of 70’s soul, and a pinch of rap.

The Haggis Horns formed almost twenty years ago and during this time the have worked with many artists and bands that include the likes of Mark Ronson, Amy Winehouse, Corinne Bailey Rae, Jamiroquai, Lily Allen, Lou Donaldson, Martha Reeves, John Legend, The Roots, The Abstract Orchestra and Roots Manuva, to name a few. Therefore its no surprise that One Of These Days takes its place at the top table.

The album begins with Curse Of The Haggis a menacing slow paced funky banger that whets the appetite for the rest of the set menu. Next up is New York Beat the first of two featuring established singer Lucinda Slim. This one transports us back to the disco era and the city that gave us Studio 54. The other is World Gone Crazy the second single from the album. This one is a smouldering piece of soul.

London MC Doc Brown takes the vocals on Take It Back and What’s It All About to give the album a helping of funk/hip-hop. The pulsating All Fuzzed Up with its wah-wah effects and heavy guitar adds an intensive tone to the record. Staying with the funky guitar licks and heavy horns Gonna Be Alright should also hit spot if mid- 70s b-boy funk is your penchant.

Last but not least John McCallum features on The Long Way and the title track One Of These Days to deliver his smooth soulful vocals.

All you need to do now is go feed your hungry ears a hearty helping of Haggis Horns. Enjoy!

One Of These Days by The Haggis Horns