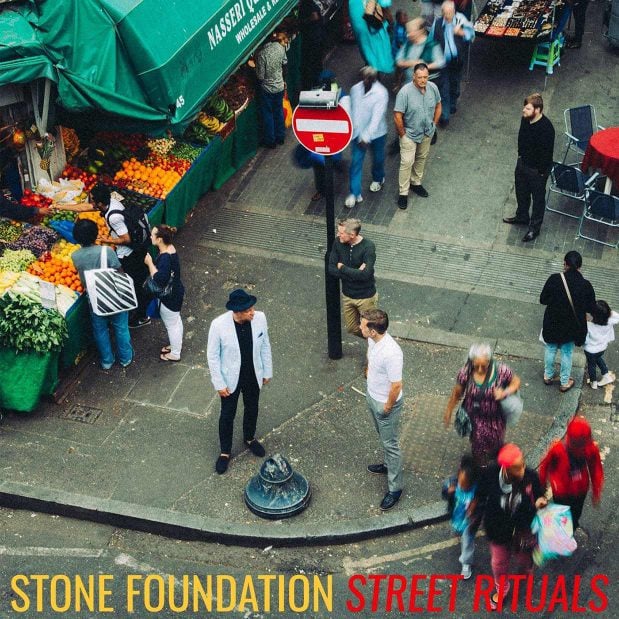 Essential Tracks: ‘Open Your Heart to the World’, ‘The Limit of a Man’, ‘The Colour Of…’, ‘Strange People’, ‘Your Balloon is Rising’, ‘Season of Change’

Stone Foundation may be one of our most anticipated records of the year since their announcement in January that they’d recorded a new album with none other than Paul Weller, but that it also featured him, and included William Bell and Bettye LaVette.

We were fortunate to have heard these tracks back at Christmas, and had plenty of time to really think long and hard about them. I feel fairly certain I’ll look back at this at the end of 2017 and it will certainly be in the running to be the best of 2017.

They very strategically let 3 tracks out of the bag as a proper teaser to the album. Starting with ‘Your Balloon in Rising’ featuring Paul Weller. Followed about a month later with ‘Season of Change’ featuring Bettye Lavette (we were fortunate to premier that on our show in London when the Neils joined us), and more recently, ’Strange People’ featuring William Bell, and ‘Limit of a Man’ this past week. With names like that, its hard to imagine anything less than a brilliant album. Not to mention what the production value of recording in the Barn with Paul Weller gives to a band like this. Stone Foundation are now likely at their best and will be held to this standard going forward.

Its clear from the opening line and the first few chords, that this is going to be a call to arms, another album needed for the world that we currently find ourselves in. Its critical, yet optimistic. Its melodies and progressions are uplifting and inspiring.

The album starts with ‘Back in the Game’ which features Paul Weller. The strings and horns open this into a humbling but optimistic approach. With the chorus ‘Gonna do my best to get back in the game”, its the perfect way to start off this record.

‘Open Your Heart to the World’ which could be a slogan on every t-shirt and billboard across the globe. It has a deeper tone vocally and the tremolo effected piano, almost reminiscent of ‘Holy Blue’ from their first album, but with the consistent bass drum that becomes the heartbeat of the song that transforms the beginning into a 70s influenced dancer with strings and bongos, and a chorus that says “Open Your Heart…” Amazing that such a simple message could sound so powerful and relevant.

The third track, ‘A Love Discovered’, is a beautiful track that cools it down, with a piano and bass lead track, that really shows Sheasby and Jones at their best. The sounds of the horns are perfection, and leads to a stunning piano sound in the middle that has a feel of Donald Byrd’s ‘Cristo Redentor’.

‘The Colour of’ is a rhythm lead track with fantastic lyrics. Verse and bridge. Lovely repition, leaving out a clear chorus, but simple enough for everyone to sing along with. At times reminds me of Donny Hathaway musically. “Love is coming…” is a thought repeated throughout the song.

Track 6 we have the title track, ‘Street Rituals’ also featuring Paul Weller. Starts with a bit of a latin flare musically. Lyrically, positive and uplifting, about working together, and loving one another. This song, like many others on this record are a real joy based in contrast with the negative world that surrounds us everyday.

’Strange People’ featuring William Bell, one that we’ve all been excited about for a while, musically is so quintessentially Stone Foundation, and includes the belting vocals from William Bell. The addition of the strings and flutes make this song so much bigger! Another song with a clear message.

We’ve all heard the wonderfully calm ‘Your Balloon is Rising’ sung by Paul Weller with his signature piano playing, accompanied by wonderful string and horn arrangements. This relationship has gotten the best out of each other. This displays Weller at his best and Stone Foundation equally.

‘Season of Change’ featuring Bettye LaVette is a stunner that will live forever. Her vocal expressions are so superior to almost anyone else. This captures a sound of struggle that could have been written 40 years ago, but is still incredibly relevant sounding and lyrically. You can’t sit motionless to this track. This is likely my favourite of the album.

Street Rituals closes on ’Simplify the Situation’. Instead of ending lightly, they go out on a bang. “Wake up everybody, gotta stop pretending. Wake up, feel it, bring, it back to your heart. Let’s simplify the situation.